Hello there. Today I would like to share with you my first CVE, which corresponds to a command injection vulnerability found a couple months ago in the TP-Link Tapo c200 camera, that allows an attacker to take full control of the device with root privileges. It was assigned CVE-2021-4045 by the INCIBE, and you can check the official advisory here. The vulnerability affects all firmware versions prior to 1.1.16 Build 211209 Rel. 37726N, so if you own this model, I suggest you update it. 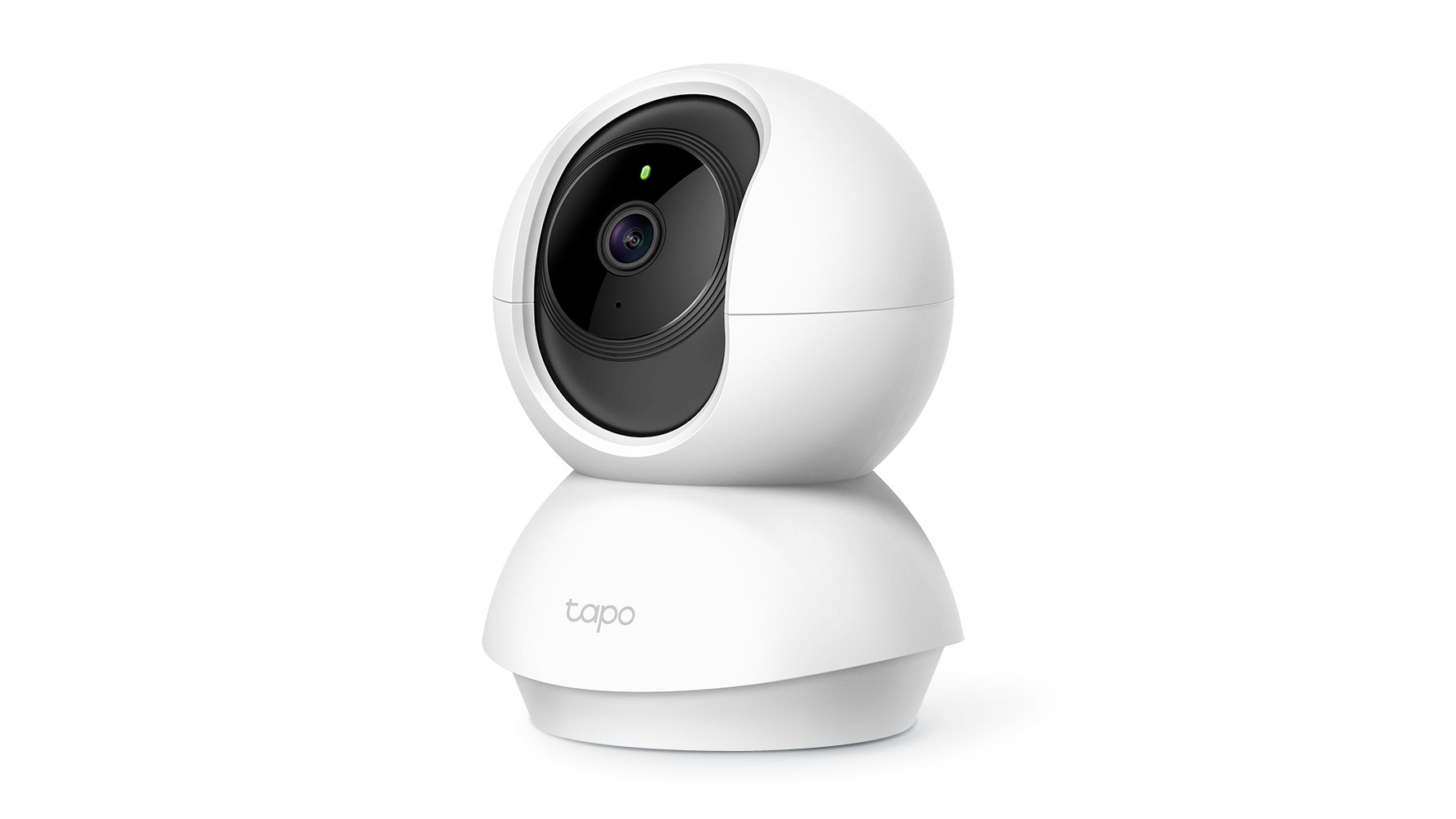 This post will be a summary of my research on this device and how it led to the discovery of this vulnerability. It has been an introduction for me to IoT and hardware hacking, but also to reverse engineering, so please don’t be hard on me as there may be some mistakes. I also want to thank the cybersec community, since there was always a video, an article or something else that inspired me to learn or try new things whenever I got stuck. Finally, remember that failure is your best friend, although it sometimes makes you take six months for something you could have done in one or two if you would have read correctly the results of a shell command.

Anyway, let’s start with the article. Thanks for reading and I hope you like it.

Once I got the camera out of the box, I proceeded to configure it with my phone and my WiFi. It was fairly easy to do. I started to play with it and I was surprised that a 30€ IP camera has so many functionalities. It can record video and audio to an SD card, it can be moved almost 360º horizontally and like 90º vertically and it can even reproduce audio in real time from the phone app.

My initial plan was just to scan some ports and try to find some vulnerabilities, and also to check how the WiFi configuration worked, since I was very interested in WiFi security at that time. I won’t talk about the WiFi configuration, because after analyzing it with a custom hostapd + dnsmasq access point and Wireshark, I didn’t’ find anything interesting beyond common functionalities such as creating a wireless access point or connecting to one.

So, let’s talk about the port scanning:

As you can see, the device has some interesting open ports. First thing I tested was port 443. Although nmap clearly indicates that it uses https, when I initially did the scan, I just overlooked it and spent quite a long time thinking that port 443 was running http. Because of this, I only tested http://192.168.1.81:443 instead of https://192.168.1.81:443, so the only thing I got was 400 responses. As I said in the introduction, this journey was full of failures. Regarding the other ports, the services running on them were totally unknown to me and I didn’t find any clear information about them. At this moment, I ran out of known options, so it was time for further investigation.

Before buying the camera, I looked online for previous research on the device and, luckily, I found this Github repository where people were collaborating to reverse engineer it. One of the issues explains how to get a shell through the UART port, which I knew nothing about at the time. So I learned the basics and bought a USB to TTL converter to connect to it:

With the help of the mentioned issue, I was able to open the device with a knife and a screwdriver and quickly locate the UART. After a couple of tries and a lot of patience, I finally managed to solder some wires to the pads: 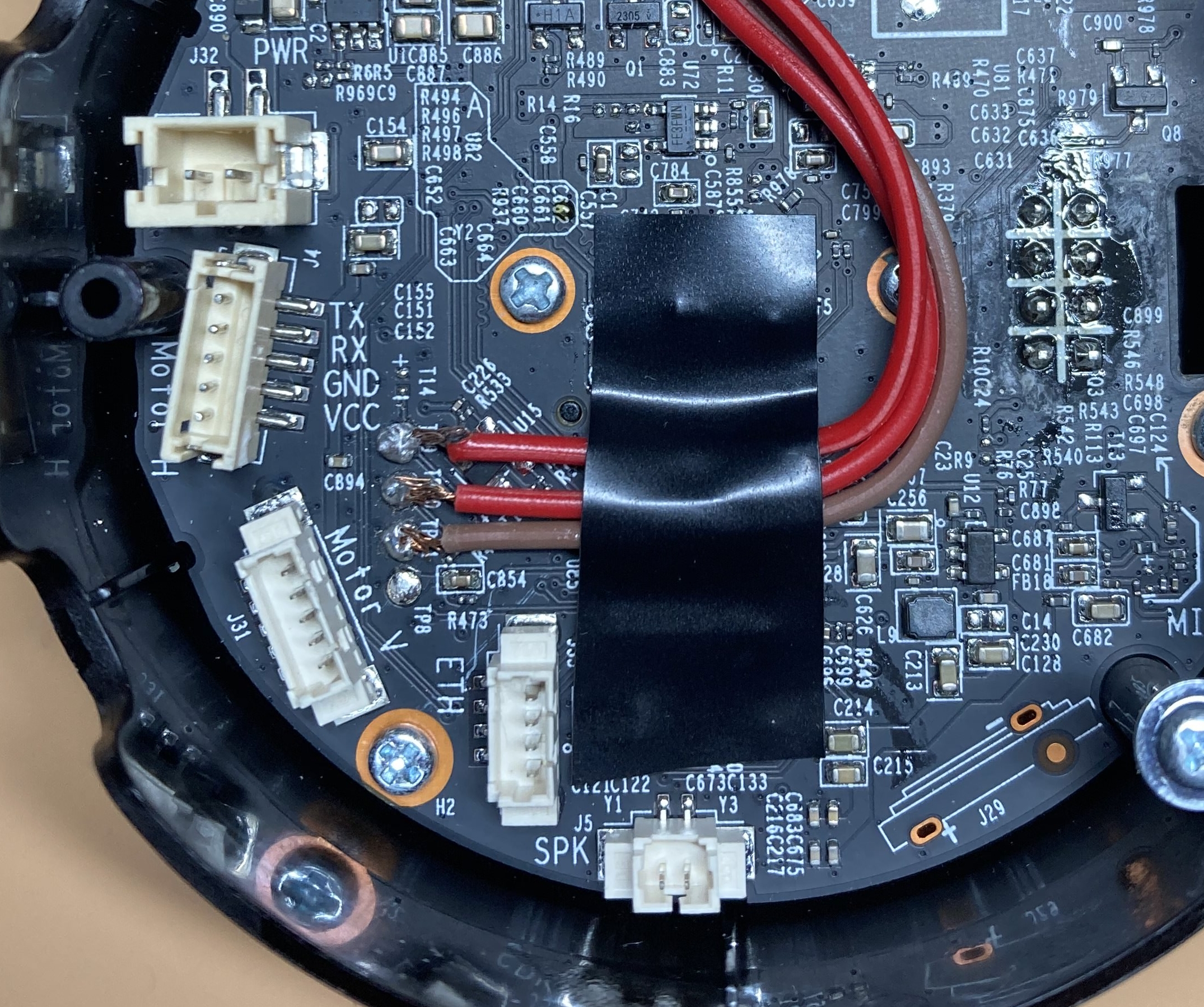 Then, it was time to test if the soldering was good enough for the data to be transmitted. I connected the wires to the USB adapter, taking into account that Rx of the UART goes to Tx of the adapter and vice versa, and connected the adapter to my computer. Again, thanks to the mentioned issue, I knew the baud rate for the serial connection was 57600, so I executed $ sudo screen /dev/tty.usbserial-0001 57600, where /dev/tty.usbserial-0001 is the USB port where the adapter is connected to, and powered on the device. I immediately started receiving data, great.

However, I didn’t have a shell yet. What I was receiving was just the booting sequence of the device, which actually was the U-Boot bootloader. It looked something like this:

By typing enter, we are asked to input an username and password. Again, thanks to that Github issue, we know the credentials, so we can successfully login with with user root and password slprealtek and finally get a shell.

Once I knew the connection worked, I needed to make the soldering less fragile, since it broke twice in the process of actually getting the shell. I applied some hot melt silicone to secure all the wires and closed the device again, disconnecting all motors. Now, my testing unit was ready to go: 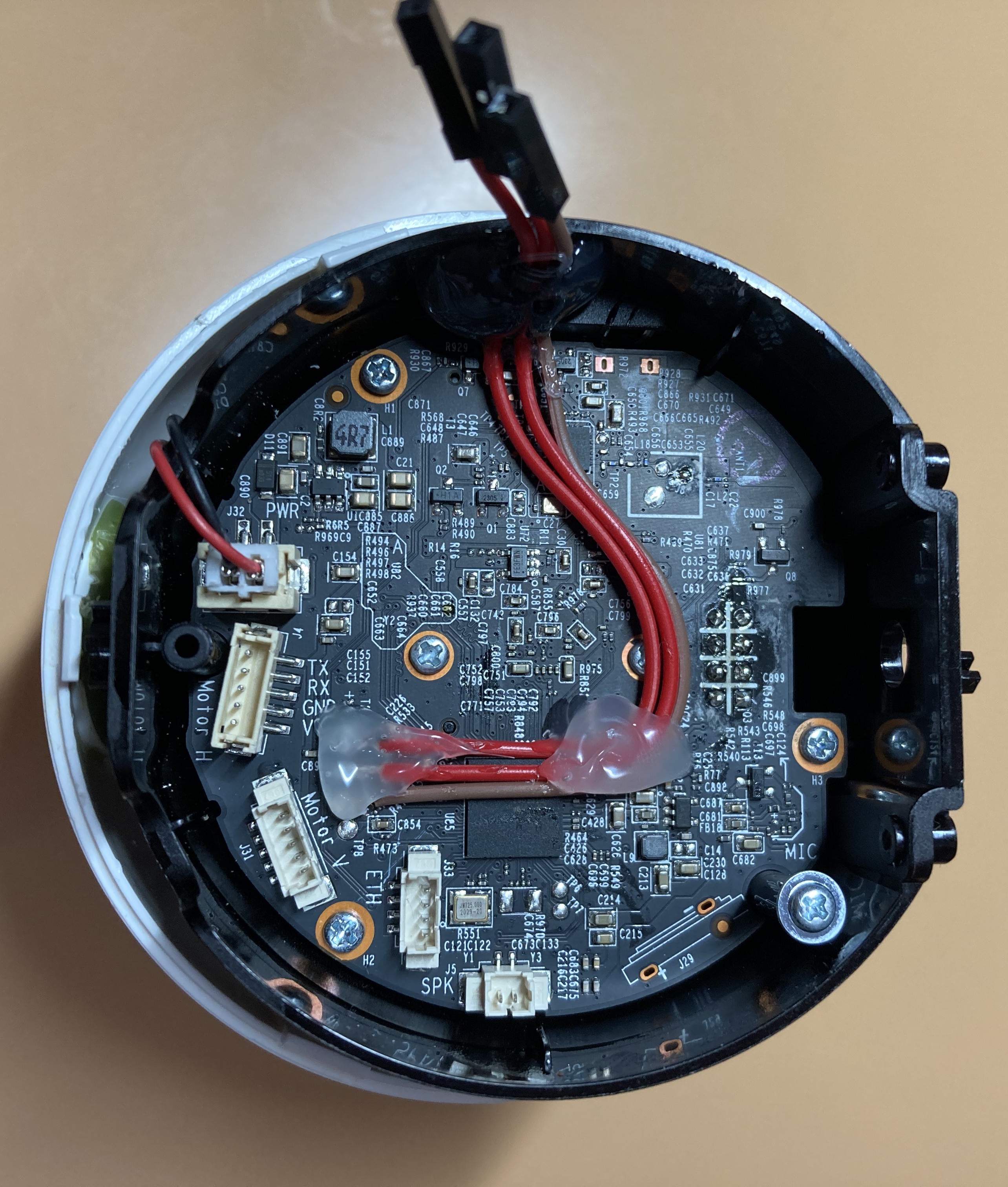 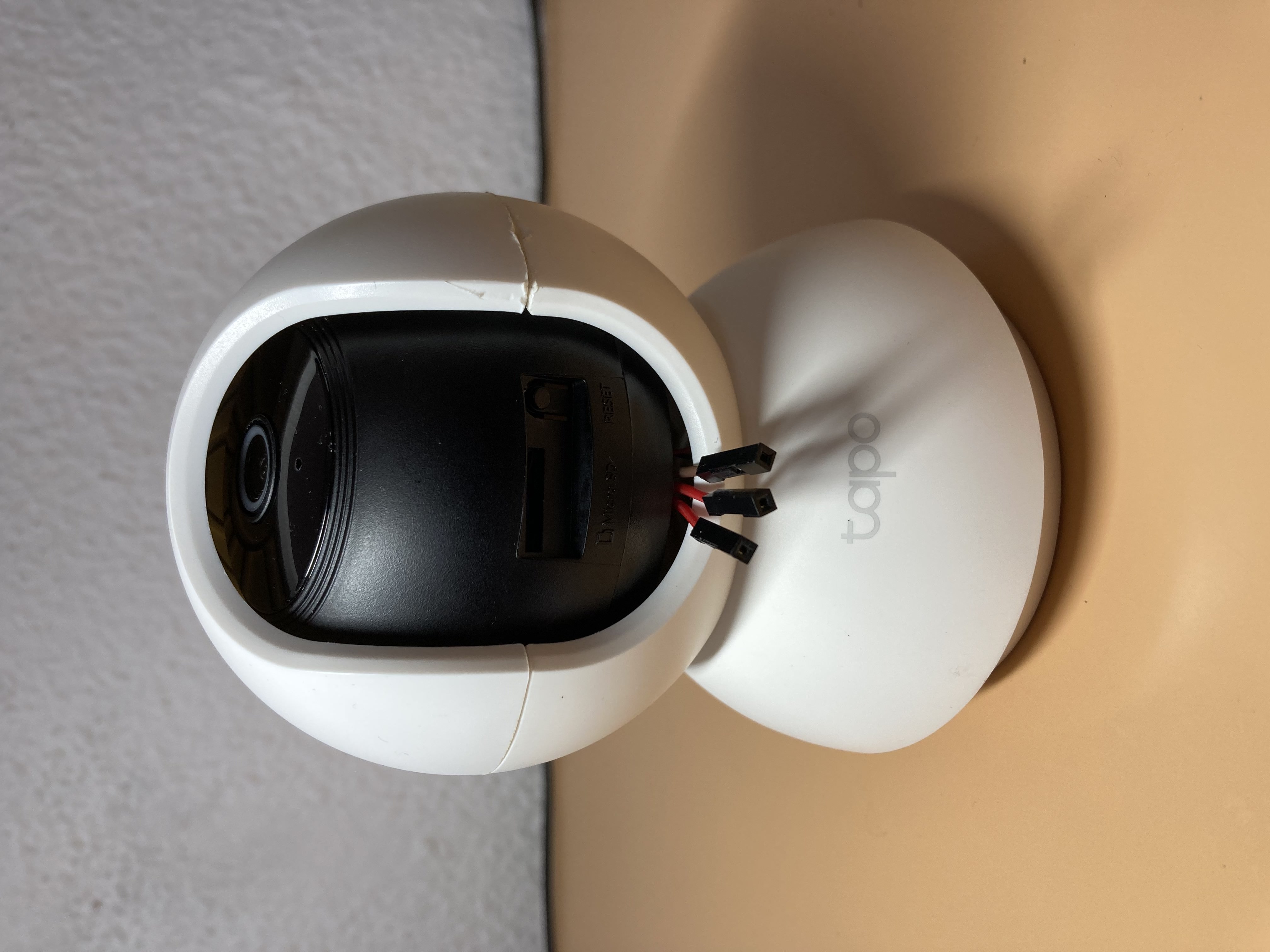 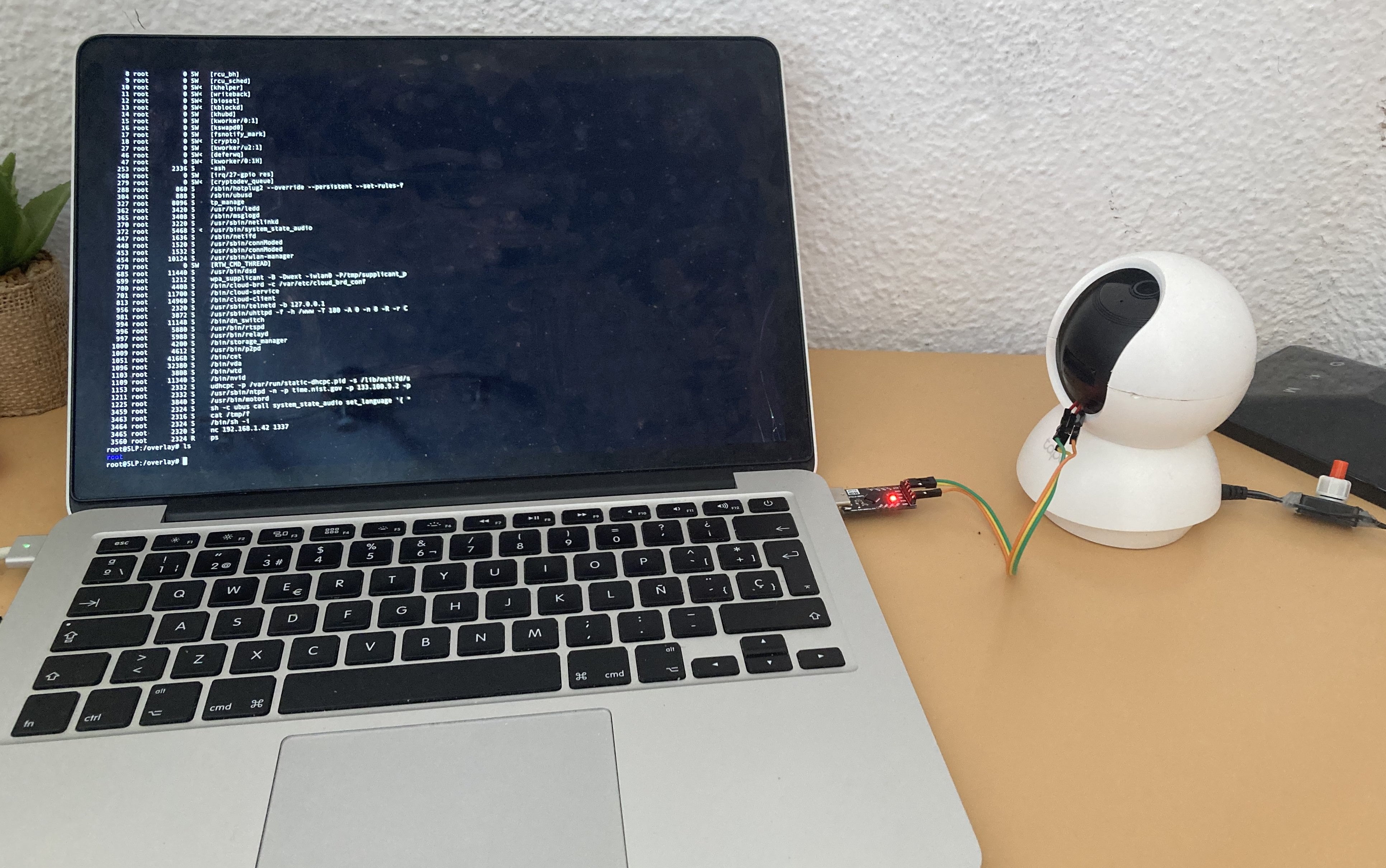 Now that we have a shell, let’s explore the device:

As we can see, this is an OpenWRT machine running Linux 3.10.27. Now let’s check active processes and open ports:

We can see the processes behind those open ports seen in the nmap scan, such as uhttpd or cet. I focused specifically on the uhttpd process, since it’s the one behind the https server (which at that point I still thought it was http) and I was already very familiar with http protocols.

uhttpd is a web server made by OpenWRT to be used in embedded devices running this distribution. At this point, I wanted to know if I could get more information about it, something like the source code or, at least, the routes. I went to the OpenWRT wiki and learnt about uhttpd and OpenWRT in general. In OpenWRT machines, there is a system called Unified Configuration Interface (UCI), which is basically used to easily configure system services. Using this, we can get the uhttpd configuration:

There are some interesting parameters here. First, uhttpd.main.home points to the server document root, so we may find some web server files. Next, uhttpd.main.lua_handler points to Lua handler script used to initialize the Lua runtime on server start, since uhttpd supports Lua scripts, so there may be more interesting files there. However, /www directory is empty and there is no sgi directory in /usr/lib/lua/luci nor uhttpd.lua file in the system. I kept trying to find anything about how this uhttpd instance worked but I found nothing, only configuration parameters pointing to nowhere.

At this point, I knew that the solution to this was to directly analyze the uhttpd binary and reverse engineer it, but before that, I wanted to create a testing environment so I could know what was happening inside the web server when I made the requests, since the way the process was created, there was no output anywhere.

I tried running the command found in the output of the ps command for process 861: /usr/sbin/uhttpd -f -h /www -T 180 -A 0 -n 8 -R -r C. However, I got a lot of errors and couldn’t make it work. Since I wasn’t able to create the same uhttpd process in a different port, I tried to go after the missing output by checking the /proc entry for the process, in order to try to read them if they existed (as explained in this video from PwnFunction). But there was a big problem:

All file descriptors for stdin, stdout and stderr were redirected to /dev/null, which is basically redirecting them to a black hole where they cannot be found. I was stuck and I didn’t know what to do. Since I was already in the /proc entry, I started looking around as I didn’t remember that /proc entries had that much information about a process and was curious about it. Thanks to this random curiosity I stumbled across the environ entry, which contains all environment variables for that process. One of these environment variables was UHTTPD_ARGS=-h /www -T 180 -A 0 -n 8 -R -r C200 -C /tmp/uhttpd.crt -K /tmp/uhttpd.key -s 443. I immediately realized that the command shown by ps was not correct and later found that it was because the UART shell didn’t have enough width to display all characters. Yet another fail that made me learn new important things: never trust the output given by a UART port.

Now I could finally create another instance of uhttpd with the exact same parameters and no pipes to /dev/null in order to test the binary while reverse engineering it.

This was my first time using Ghidra. I had seen some videos and read some articles about it (thanks stacksmashing and liveoverflow for the amazing and easy-to-digest content), but never really played with it, so this was a very good opportunity to learn.

I opened the uhttpd binary and, after some trial and error, figured out that the language was MIPS32, little endian, with mips16e. Some function names came by default with the binary, but others didn’t. I also spent some time renaming functions since, apparently, Ghidra is usually confused with external functions and you get strange wrappers for them like:

I looked at the main function and other important ones to figure out the logic of the binary and how it was structured. I found some interesting ones, already named, among which were do_login or uh_slp_proto_request. I will talk more about the last one later.

After this initial contact, I started looking for bugs. Since I’m a huge noob with overflow vulnerabilities, the first thing I did was to search for system, exec and popen calls, in order to check if there was any command injection vuln that I could easily exploit. And oh boy, I was lucky. 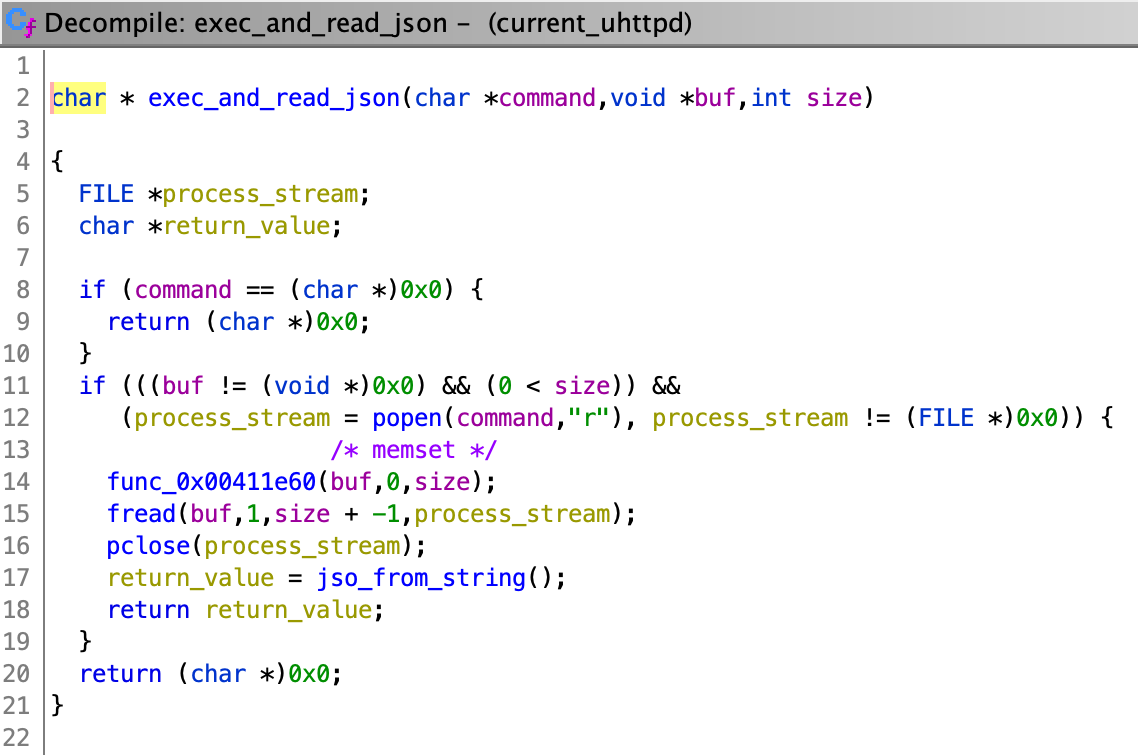 exec_and_read_json is used by 2 unnamed functions, which I named set_language and wifi_connect. They respectively deal with language and WiFi configuration (obviously). wifi_connect seems to parse single quotes ('), however, set_language doesn’t. This means that if we can control the input for the set_language function, we can successfully inject our own commands. 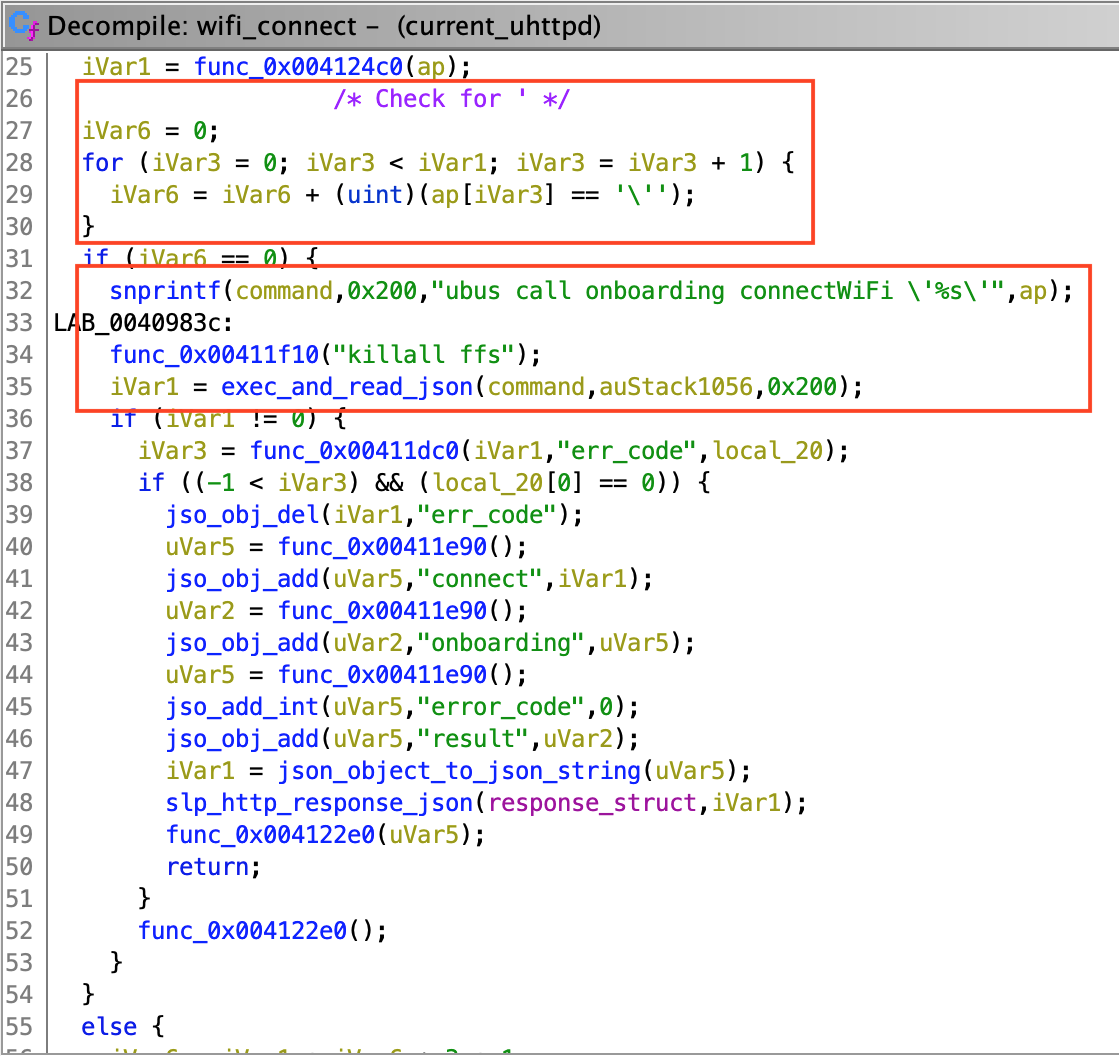 Function set_language is used by uh_slp_proto_request, the function I mentioned before, which passes as input some parsed data received from the user. 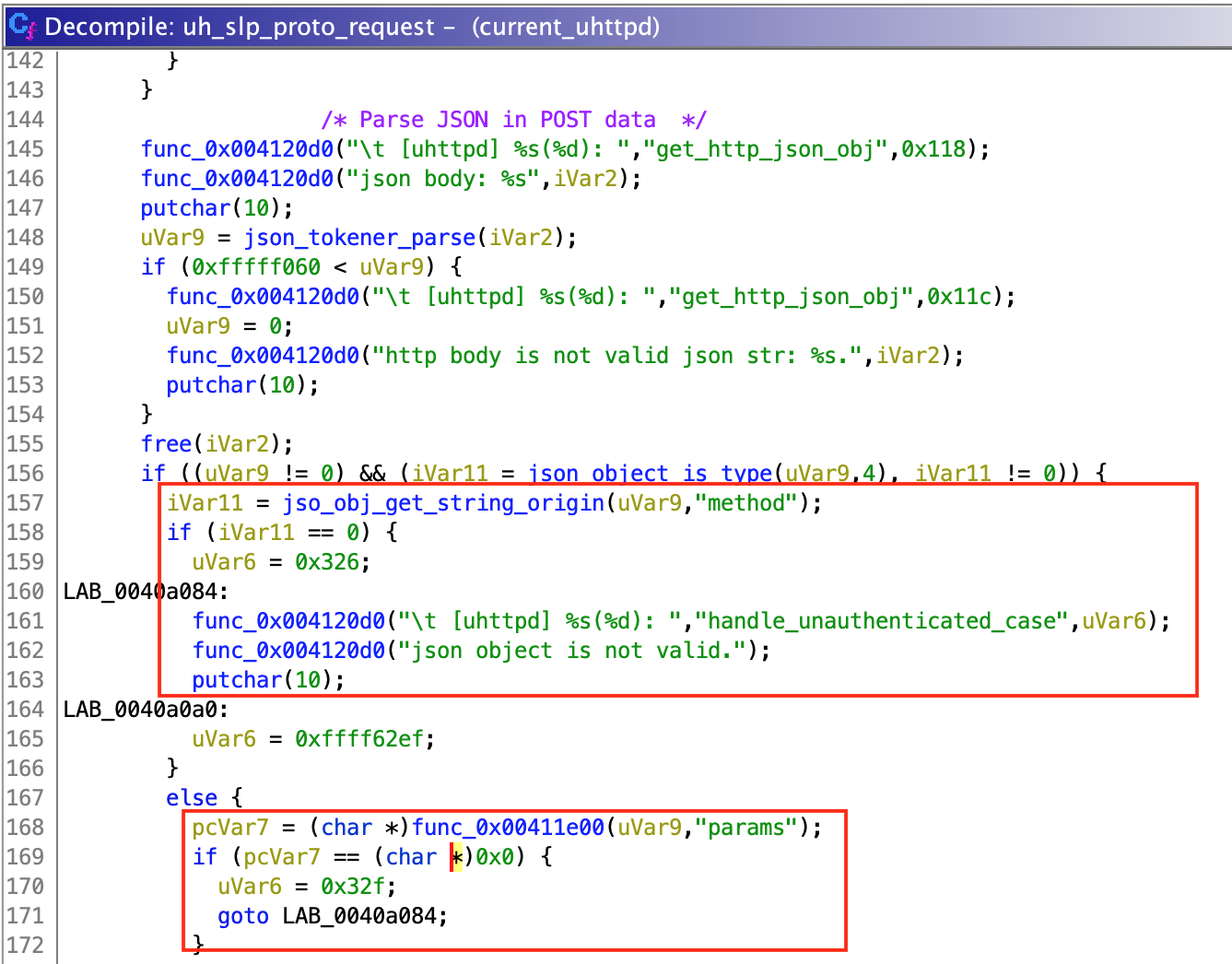 To parse the user data, uh_slp_proto_request checks if it is a valid JSON object. Then, it gets a string value identified by key "method" and a dictionary value identified by "params" (at least that is what I think, since function call could not be resolved by Ghidra but seemed to work this way). Depending on the selected method, uh_slp_proto_request selects the function which will be called.

So, by sending {"method": "setLanguage", "params":{}} we successfully call the set_language function and pass {} as language_json parameter. Then, inside set_language, language_json object is converted to string and inserted directly into "ubus call system_state_audio set_language \'%s\'" to be executed. 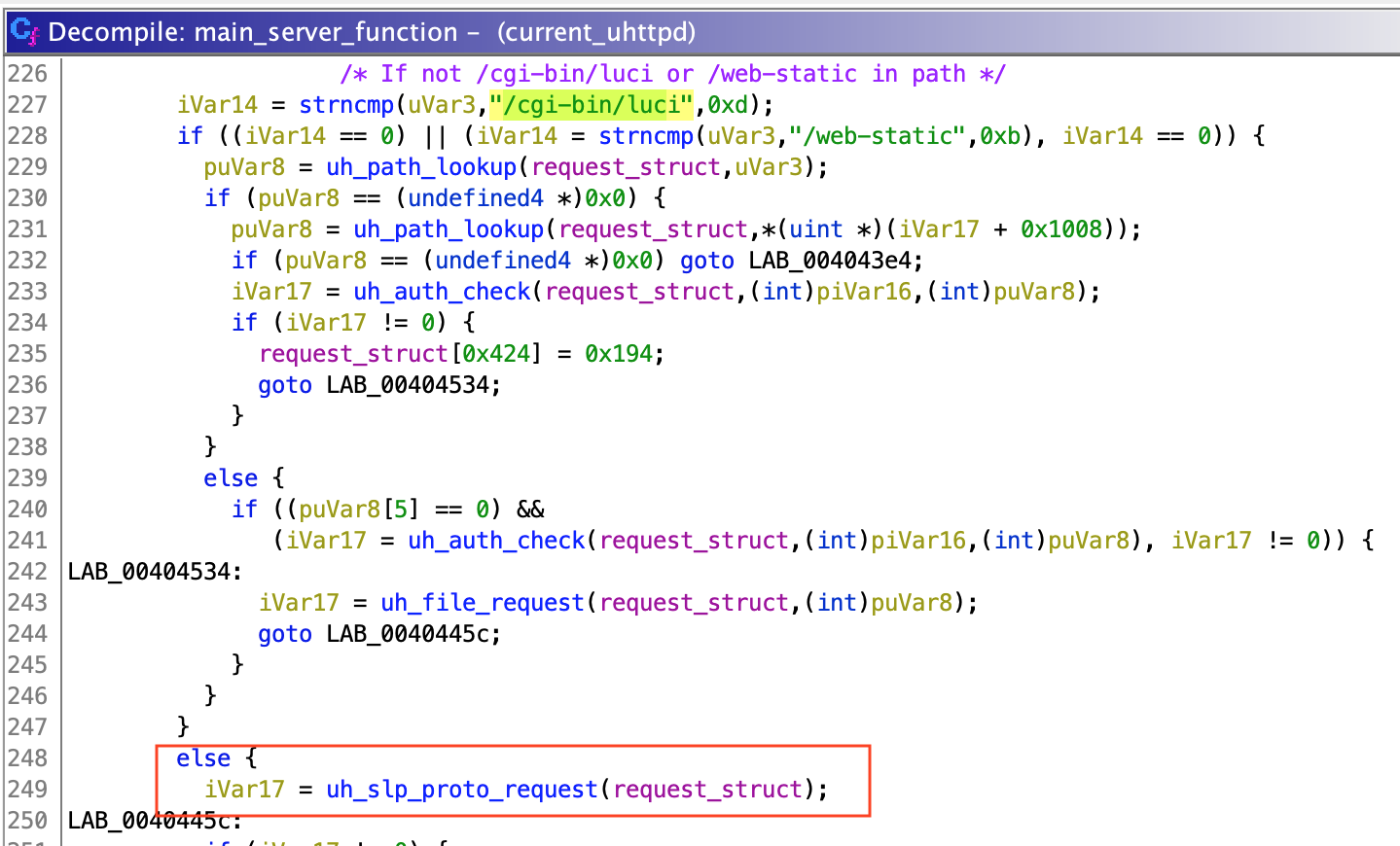 By guessing and sending a couple of requests to the camera, we can check that data used by uh_slp_proto_request is regular POST data. So, if we send a POST request to / with the previous payload, uh_slp_proto_request will process this data, call set_language and our payload will be injected in the command executed by exec_and_get_result.

As you can see, I didn’t mention anything about authentication, since the setLanguage method can be called without login. This allows any user to take full control of the camera with just one unauthenticated request.

Now, it’s time to write the exploit. I spent some time figuring out how to get a reverse shell with netcat. It seemed trivial but I couldn’t get it to work. I found out that the netcat version installed in BusyBox is quite limited in terms of functionality, so regular reverse shells were not valid. However, I found what I was looking for in PayloadsAllTheThings repository (as usual), and got the perfect reverse shell. Since uhttpd is running as root (thanks TP-Link), we get a shell with highest privileges just by sending a malicious POST request. The exploit is available at my Github page: 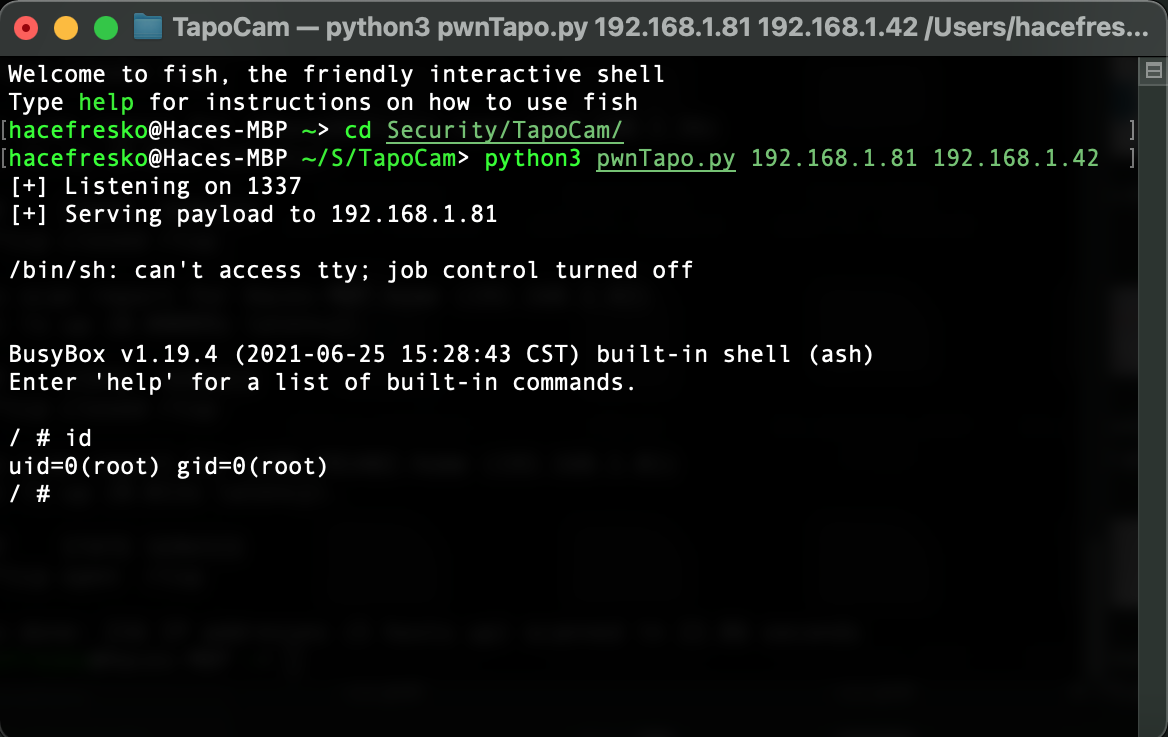